Be one of the first to own a NUNI Tortilla Toaster

goodcounsel client Nuni Toaster has announced that its flagship product, the NUNI tortilla toaster, is now available on Amazon. Through May 5, you can get one for $59.

Any readers who do “taco nights” with their families, or simply love tacos, know that conventional means are not up to the task of heating multiple tortillas quickly and evenly. The NUNI is here to solve your problems.

To see the rave customer reviews and learn more about Nuni Toaster, visit their website.

Considering the long odds facing startups, it is always very exciting when a current or former goodcounsel client achieves a successful exit. Yesterday, the world learned that ItemMaster, which developed a platform that enables brands to create and manage content for distribution to retailers, was acquired by Gladson.

goodcounsel is proud to have played a supporting role in helping ItemMaster reach this milestone.

END_OF_DOCUMENT_TOKEN_TO_BE_REPLACED

We’ve written in a past edition of our goodnews newsletter about an Illinois program to encourage investment in innovative early-stage companies, the Illinois Angel Tax Credit Program. Illinois has recently made an important change, which could affect the way that companies would want to structure an early investment round.

END_OF_DOCUMENT_TOKEN_TO_BE_REPLACED

The moose, the entrepreneur, and the local news

This morning I stopped in at a local market to pick up a little breakfast snack. As seems to be the case everywhere these days, I found myself face-to-face with a large screen TV at the checkout counter. (Heaven forbid we should not have a screen at us in every restaurant, elevator, and public space.)

The TV was tuned to one of the local morning news shows. A segment came on, the title of which was something like “video captures moose fight.” Right then and there, just as Bruce Banner inevitably transforms into the Hulk when confronted with a threat, I knew that the moose story was going to trigger one of my periodic diatribes about local TV news. So here goes.

END_OF_DOCUMENT_TOKEN_TO_BE_REPLACED

Categorised as: Entrepreneurship, News and Views

For early-stage startups looking to raise a pre-seed financing round (usually from either friends and family, angel investors or Micro VCs), the Simple Agreement for Future Equity, or SAFE, has become a mainstream, company-friendly mechanism to complete the financing. (See goodcounsel’s original post about SAFEs, here.)

END_OF_DOCUMENT_TOKEN_TO_BE_REPLACED

As a corporate attorney, I don’t often find references to the kind of work I do in popular culture. I was pretty surprised, therefore, when I was listening to Boardinghouse Reach, the newly released album by Jack White, one of my favorite artists (who is rightly viewed as one of the great musical talents in rock). The album features a catchy track called “Corporation” (Spotify, Apple Music), in which White sings:

END_OF_DOCUMENT_TOKEN_TO_BE_REPLACED

Categorised as: News and Views

SXSW lived up to my expectations. Sure, it took time to figure out the best strategies for getting around the convention venues, for getting in to the most interesting sessions, and most of all, for avoiding lines (it felt like the former Soviet Union at times). But I learned a great deal about trends in technology and beyond, met some cool people, and was even able to pick up and share some relevant industry developments with clients. 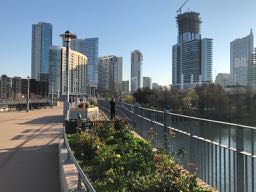 Also, Austin is quite a lovely city.

END_OF_DOCUMENT_TOKEN_TO_BE_REPLACED

How can you go to SXSW and not attend some films (or what people outside of film festivals call “movies”)?

After visiting WeWork Austin to catch up on client work, I headed over to the Stateside Theatre on Austin’s main strip, Congress Avenue, to view Chef Flynn. It’s a wonderful documentary about a boy who develops a passion for cooking and some incredible kitchen skills, and thereafter enlists his elementary school classmates to be his line cooks and servers at an in-home “restaurant.”

END_OF_DOCUMENT_TOKEN_TO_BE_REPLACED

Based on the sheer number of vendors showcasing VR/AR products on the trade show floor of the conference, I would say that the arrival of VR/AR into the mainstream was one of the big themes of SXSW 2018.

END_OF_DOCUMENT_TOKEN_TO_BE_REPLACED

In “Enlightenment Now,” a presentation packed with graphs showing data from the Middle Ages to the present day, Harvard psychology professor Steven Pinker persuasively argued that the world is doing better than ever before by every important measure: decreases in disease, poverty, pollution, inequality, infant mortality, war and wartime fatalities, authoritarianism; and increases in health, happiness, life expectancy, and democracy.