the ups and downs of risk 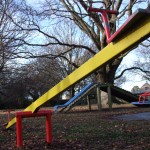 I have young children, so I’ve been frequenting playgrounds over the last 8 years or so. I’ve noticed, during this time, that there’s an incredible degree of sameness to them. Something has homogenized our playgrounds. They are almost uniformly boring.

One example: I noticed that a staple of the playgrounds of my youth, the see-saw, is gone – gone, or replaced with a bastardized version with springs rather than a fulcrum, so that at rest, instead of one side being up and the other side down, it just sits there horizontally. The problem, of course, is that even when kids are using it, the springs prevent it from going up or down much on either side. What is the point of a seesaw that doesn’t go up and down? Lord have mercy. No wonder my kids have no interest in these.

I thought about it for about a half-second, and figured that personal injury lawyers must have something to do with this situation.

And indeed, it seems to be the case that after a spate of personal injury litigation in the 1970’s, municipalities started tearing up playgrounds, taking out equipment  such as high jungle-gyms and fulcrum seesaws, and replacing them – if at all – with “safer” equipment. Safer, as in less challenging and less fun. (As an aside, I wonder if the problem in the 1970’s, when cities were going bankrupt, wasn’t so much with playground equipment per se, but rather, with poorly maintained equipment.)

I am sure that you can find some terrible stories of children getting hurt on playground equipment, but it’s hard for me to believe that they are a statistically significant source of childhood injuries. Checking the CDC website, one learns that in the decade 1990 to 2000 there were 147 playground deaths of children 14 and under. Each of those was a tragedy for a family. But looking at this scientifically, this amounts to just under 15 deaths per year. Some of these deaths, according to statistics, were due to inadequate supervision or other causes, not any inherent danger of the equipment. Now, look at the overall mortality rates for this age group. In just one year, 2008, 4,643 children age 14 years and under died from “unintentional injury.” Doing the division, this means that playground accidents accounted for three-tenths of one percent of the accidental fatalities. The leading causes were, in order: motor vehicle crashes, suffocation, drowning, and fires/burns. (So, if you really want to protect your child, live in a densely settled, walkable neighborhood that doesn’t require car trips for everything. Your family will be healthier in every way.)

Fortunately, it appears that the pendulum may be swinging back. (Swinging pendulums? Those are dangerous!) Experts in child play (what a great job that must be) have begun to appreciate the extent to which kids need challenges and, yes, just a little bit of danger in order overcome fears and master the real world — a world in which springs cannot be attached to everything to smooth out the highs and lows.

There’s a lesson to be learned that goes beyond playgrounds. People in general and lawyers in particular seem to think that all risk can be eliminated. Of course, it can’t be. A certain amount of risk is inherent in every human activity. By going overboard to stamp out risk – to prevent whatever small part of the 15 annual playground deaths that can be attributed to “dangerous” equipment – we have spent millions tearing up nice old playgrounds, and replacing them with bland, boring ones that don’t serve the intended developmental purposes. So, in which scenario lies the greater cost?

In business deals, the lawyer you want at your side is the one who tries to minimize risk but who also realizes that risks are unavoidable and, that by trying to avoid them completely, you run the larger risk of killing the deal entirely – losing out on potentially greater benefits.

Next time you are thinking about hiring a lawyer, ask where he or she stands on the issue of seesaws.