In a session entitled “Hacking our Democracy,” Mark Warner, the Senior U.S. Senator from Virginia and Vice Chair of the Senate Intelligence Committee, summarized what is currently known about the extent of Russian attempts to influence the 2016 election.

Warner noted that Russian troll farms persist even today to try shaping the public debate to increase polarization and division. He portrayed the major social media companies (as well as the intelligence community) as being late to wake up to the use of their platforms as vehicles of misinformation, and still not doing enough to address it. (The subsequently reported story that Cambridge Analytica improperly used Facebook to harvest the data of 87 million people underlines Warner’s points.) Warner also questioned whether too much of our country’s $700B defense budget goes to military hardware designed to fight 20th Century conflicts, and not enough to prepare for and defend against the kind of electronic and information warfare that is likely to characterize the 21st Century. He closed with an ominous prediction about the threat of misinformation that may be posed by new, insidious techniques that are now at our doorstep, in the form of “Deep Fakes.” 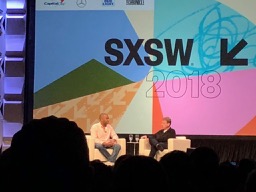 The keynote discussion between Ta-Nehisi Coates and Jeffrey Goldberg of The Atlantic magazine, ranged beyond its billing of “Journalism in the Age of Trump,” and into areas such as the cultural significance of the movie Black Panther, the black community’s views of Barack Obama, what it means to be a “public intellectual,” and the surprising attack on Coates by Cornell West. You can watch this event for yourself.