music and entrepreneurship (or: go see Adrian Holovaty at the Green Mill) 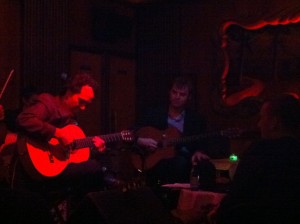 At last month’s Northwestern Entrepreneurship Conference, Groupon CEO Andrew Mason was a featured speaker. Mason, as many now know, was a music major at Northwestern. Peter Barris of NEA (one of Groupon’s major investors), who shared the stage with Mason, noted that musical talent seemed prevalent (in his experience) in technology entrepreneurs.

This observation came to mind when I went to see another fine Chicago entrepreneur, Adrian Holovaty, at the Green Mill last Wednesday. Adrian, the founder of Everyblock (now part of MSNBC.com) as well as the co-creator of Django (“an open source web application framework for Python”), is an extraordinarily talented guitarist, and performs each Wednesday at the Green Mill as part of the Django Rheinhart-influenced guitar group Alfonso Ponticelli and Swing Gitan. (Hmm, wonder where he came up with the name for that programming language of his.)

If you haven’t been to the Green Mill, it’s one of the famous music venues in Chicago, a must-visit. So go on a Wednesday and see Adrian play. I can’t say how Adrian’s software code his, but the man can really play guitar.