Now that the “fiscal cliff” has come and gone, cliffs are less frequently in the news. In startup circles, however, a different kind of cliff is always popular: the vesting cliff.

Typically, vesting of founder or employee equity happens in even increments, daily or monthly. If you graphed that vesting schedule, it would obviously look like a straight, upward-sloping line, starting at zero and finishing at 100 percent vesting. Nearly as typical is to see the first year of vesting subject to a “cliff,” meaning that the first year of vesting happens not incrementally but all in one pop, at the end of the first year. A graph of such a vesting schedule is pictured below, with the vertical line representing the cliff. 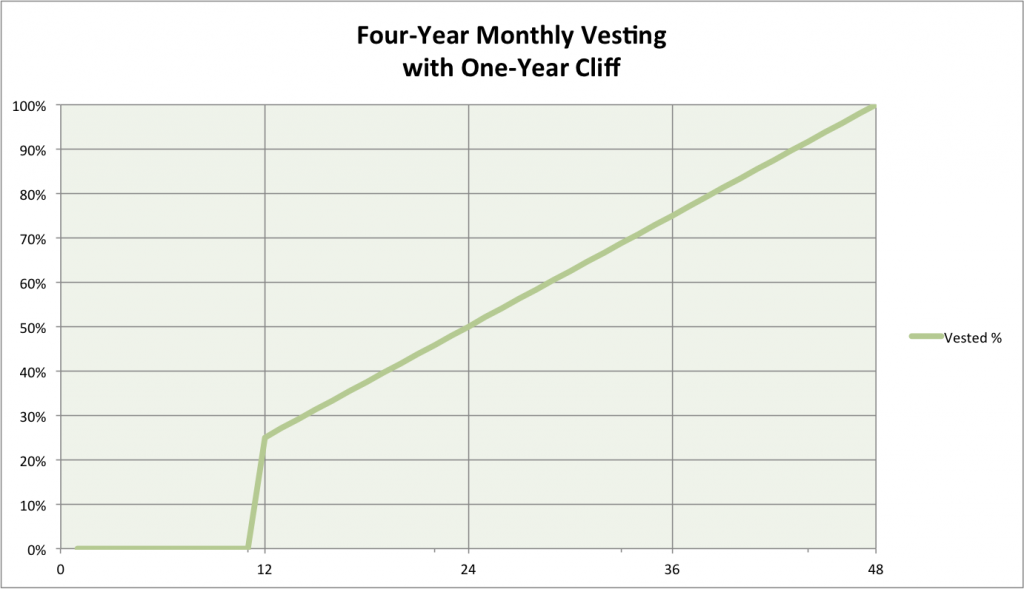 In our practice, we represent both companies and individual co-founders and employees, giving us a balanced perspective. My message to all of these parties today is: don’t use one-year cliffs. I know that this defies conventional wisdom, but here conventional wisdom is simply wrong.

We recently represented a client who was terminated without cause just a few days in advance of his one-year cliff. I am sure this happens quite frequently. This is pretty damned unfair. A year is a long time to spend without earning equity, especially when one considers that startups rarely pay market cash compensation and hold out equity as the pot of gold at the end of the rainbow, rewarding hard work.

The standard justification for a cliff is that it gives the company the opportunity to assess whether the equity recipient is a “keeper,” and if not, to send the person packing without giving up any ownership in the company. And indeed, it’s reasonable to believe that during a certain ramp-up period, a person is not likely to contribute anything to the company of lasting value. If a CTO only sticks around for a month before being fired or resigning, the odds are that she has not done much more than to learn the location of the washroom and become familiar with the company’s existing systems and processes. Little will have been added that would justify her leaving the company with ownership.

At what point a new hire’s efforts have contributed enough value to justify ownership is open to debate, and surely varies by position and company, however I believe that this point almost always comes well before the one-year mark. (If you let someone remain in a senior role at the company for close to a year who is not adding substantial value, what does that say about your leadership of the company?) I would guess that, on average, a new employee’s value starts to be substantially realized at between three and six months.

My recommendation is that vesting cliffs be more thoughtfully tailored to the circumstances, rather than being reflexively set at one year based on dubious conventional wisdom. If the company is particularly concerned about retention, then I would recommend implementing a one-year cliff in which, upon the termination of the employee without cause (“cause” being defined as crimes and other really bad things), the cliff resets and the employee vests as of some earlier point (say, 90 days). This way, if the employee is let go quickly, terminated as a result of serious misconduct, or quits during the first year, he or she earns no equity, but otherwise, the employee will vest in proportion to the agreed vesting schedule.

Startup companies, the people who work there, and those who invest in them all may be said to be part of a startup community. I realize that “ecosystem” is the more popular buzzword of late, but ecosystem puts me in the mind of lions eating gazelles, whereas “community” evokes human beings working together. A community is a setting in which people look out for their own interests but also value the well being of all of the members of the community. A community should have norms of behavior, and people who violate those norms should suffer reputational consequences. Letting someone work for you for a long time, and then firing them right before a vesting cliff, should violate those norms.

There is no more experienced and well-regarded venture capitalist than Fred Wilson of Union Square Ventures. As a VC, he has no incentive to be excessively generous with equity. Yet here’s what Fred has to say about letting someone go just before a one-year cliff:

[I]f you are close to an employee’s anniversary and decide to move them out of the company, you should vest some of their equity even though you are not required to do so. If it took you a year to figure out it was a bad hire then there is some blame on everyone and it is just bad faith to fire someone on the cusp of a cliff vesting event and not vest some stock. It may have been a bad hire but a year is a meaningful amount of employment and should be recognized.

Better still, though, to set up the vesting arrangements at the outset so that the right thing is also the required thing.